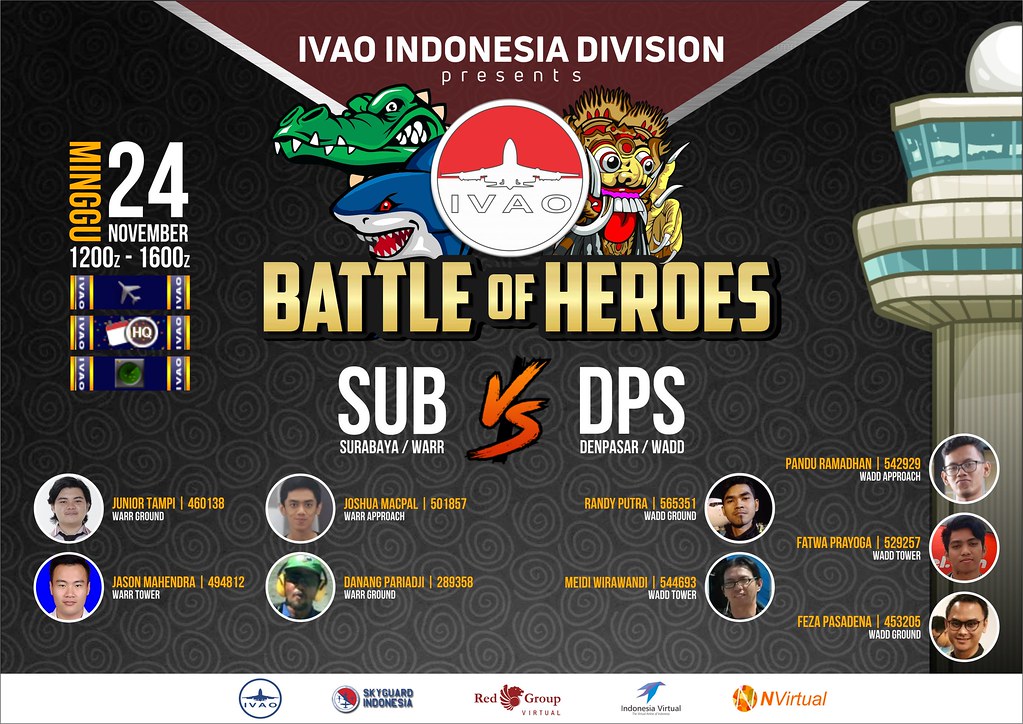 HISTORICAL BACKGROUND
Indonesia celebrates its Heroes Day on November 10 and IVAO-Indonesia plans to celebrate this in a new, different way. This year's event, "Heroes Connect", celebrates two key battles in the Indonesian National Revolution, the Battle of Surabaya, and the Battle of Maragana (Bali).
―Battle of Surabaya
On 10 November 1945, the Battle of Surabaya took place, in which British forces fought Indonesian forces who put up an all out and fierce resistance. While the battle resulted in British military victory, Indonesia won the much needed political and psychological support from the international community, and Britain's support for the Dutch colonial restoration faded, to the extent of eventually supporting the Indonesian independence.
What is not well known is that while the battle nearly wiped out Indonesia's military capability, the battle actually lasted only until 20 November 1945.
―Battle of Maragana
The Battle of Maragana took place on the Island of Bali on 20 November 1946. A year after the Battle of Surabaya, the British left Indonesia to avoid getting further involved in the restoration of Dutch colonial rule.
Dutch forces returned to the island of Bali on 11 November 1946 and quickly moved to surround Indonesian forces on the island. With Indonesia still recovering its military strength, and faced with potential conflict with the Indonesian batallion on the island, the batallion commander, Lt. Col. I Gusti Ngurah Rai, decided to divide the batallion, leaving behind a platoon sized number of troops to put up a fierce final stand ("puputan") and allow the rest of it to escape and regroup with other Indonesian units elsewhere.

EVENT PROCEDURES
―PILOTS
Pilots are requested to fly 2 legs between Juanda, Surabaya (WARR/SUB) and Ngurah Rai (WADD/DPS) in this event. If you want to fly 1 leg in any directions between the 2 airports, combined with any inbound/outbound legs from any of the 2 airports, feel free to do so (but watch out for the different event award points).
ALL PILOTS ARE KINDLY REQUESTED TO
> Make sure you have a VALID SID and STAR.
> Be prepared - have access to charts.
> Note the SID altitude restrictions and STAR speed restrictions.
> Be ready - you may be asked to enter holdings, fly headings and speeds.
> Remember: Aviate, Navigate, Communicate.
> Maintain radio etiquette. Please wait for at least 5 seconds when entering a new radio frequency before making your contact.

―ATC
ATC positions bookable for this event are available for up to Approach positions (and upper limit extended from FL245 to FL295 specifically for this event).
ALL ATCS ARE KINDLY REQUESTED TO
> Be prepared - have access to charts.
> Book position on IVAO ATCSS.
> Have minimum IVAO AS3 Rating and be able to handle the booked airport.

EVENT AWARDS
We are to integrate the IVAO Events HQ Award in this event for both Air Traffic Controllers and Pilots!

― AIP Indonesia
Visit Here ―Note: Sign up and log in this site to get Aeronautical Information Publication.

― ATC Roster
Our ATC Roster on this event are stated here

― Contact Information
Everything about this event that makes you confused or wondering, don't be hesitate to ask via email: id-ec@ivao.aero or id-eac@ivao.aero